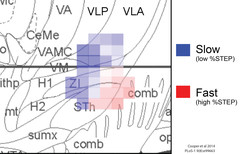 Surprisingly, deep brain stimulation's effects on Parkinson's symptoms are not instantaneous:  they wash in/out gradually when stimulation is turned on/off.  For one symptom -- bradykinesia (slowness of movement) -- we found that rate of washout depends on the characteristics of the patient (disease duration) and also on the location of stimulation.  This is a clue to the physiological mechanisms by which DBS affects the symptom.  Other symptoms wash out differently, which may mean DBS acts on them by different mechanisms.  We are studying DBS washout for two other symptoms:  muscle rigidity, and gait.

Percent of fast-vs.-slow-washout DBS effect on bradykinesia varies with location of stimulation 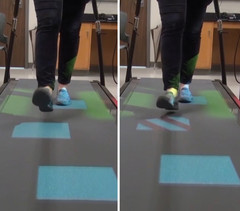 Gait impairment is one of the most serious Parkinson's symptoms.  Abnormalities (such as shortened stride, and altered stride-length / gait-speed relationship) are apparent even with straight-ahead walking on a flat, featureles surface, as in usual laboratory gait testing.  But real-world gait  requres constant adaptation to the environment.  We found that Parkinson's patients are measurably slower in adapting their gait to avoid virtual obstacles which appear suddenly at varying times.  We are examining how this varies with disease-stage, and plan to study how it's affected by DBS. 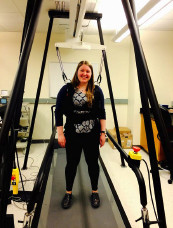 Loss of balance (postural instability) is another of the most troublesome Parkinson's symptoms.  A bipedal creature stays upright by dint of constant postural adjustments, sometimes shifting the feet to keep the center of support under the center of mass. That reflex is impaired in PD, and that impairment responds poorly to existing treatments. Little is known about how varying forms of deep brain stimulation affect it. To study that, we are developing a system to study the stepping reflex in response to a standardized balance perturbation.

Gait and Location of Stimulation

Deep brain stimulation is an effective treatment for many  Parkinson's symptoms, but results vary, with gait & balance being among of the least responsive symptoms.  It's agreed that effectiveness of DBS in PD depends on the location of stimulation, but there's  less agreement on where the best location is, especially regarding the best location is for improving gait and balance.  With colleagues at the Center for Magnetic Resonance Research (CMRR) we are relating DBS effects on gait to stimulation location, using very detailed, maps of local neuroanatomy. 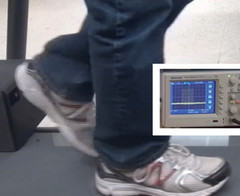 Deep brain stimulation is ordinarily delivered in a constant, unvarying, unmodulated manner.  We are testing, in humans, a novel form of DBS in which the stimulation is modulated with the gait cycle. 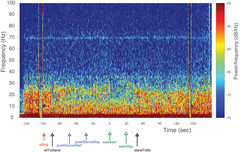 It is difficult to record electrical activity, in human brains, from deep structures such as the basal ganglia.  It gets even more difficult during activities such as gait.  In collaboration with the University of Minnesota Udall Center, we are using a special implantable DBS device which not only stimulates but also records electrical activity to investigate how neural activity varies in relation to types of gait events, including phase of gait cycle, "freezing of gait" and the sudden appearance of obstacles on the walking path.
Time-frequency plot of globus pallidus local field potential power, as the patient sits in a chair, then stands quietly, then walks, then stands again, then sits down. 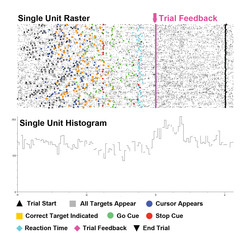 People with Parkinson's not only have difficulty initiating movements;  they also have difficulty aborting movements once initiated ("response inhibition,  RI").  Impairment of RI may underly "impulse control disorders," seen in Parkinson's and other neurological and psychiatric disorders.   Deep brain stimulation, while it improves response initiation, might either improve, or worsen response inhibition.  Both effects have been reported, and the variability might reflect variations in the precise location of stimulation.  To examine this, we are studying a stop-signal task, requiring inhibition of a prepotent target-capture response, and comparing performance in controls and in Parkinson's patients on and off medications and DBS.
Microelectrode recording during surgery, from a neuron in the subthalamic nucleus of a Parkinson's patient performing the stop-signal task